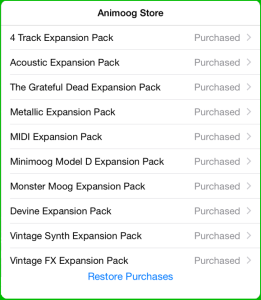 Expansion Packs are components you install to expand Animoog – some of them are free, some must be bought for a few dollars. They add immense value to Animoog. Most Expansion Packs contain presets and timbres. Other Expansion Packs bring additional features that aren’t bundled with the vanilla Animoog. The following table is an exhaustive list of publicly available expansion packs for Animoog. Lots of expansion packs can be purchased and installed directly from within the Animoog app under the ‘STORE’ tab, however, several high-quality presets and timbres are not available from within the app itself — that’s the value of the following table, to help us find those valuable gems no matter where they hide! Please share comments below to help improve it!

Let’s me share special thanks to sound designers who created and provide those presets and timbres to Animoog players, without you dear sound designers, Animoog wouldn’t be the Animoog I love so much today.

I initially wanted the Expansion Packs table to be directly crowdsourced, meaning that anyone could contribute to it, but I haven’t found a suitable solution to do that yet. For the moment, user comments below will be used.

Click on the image below for the full png version of the table. The table includes the list of official In-App-Purchase packs you need installed for the third-party presets to sound as designed without any [missing] timbres.  With this information, an Animoog player can know in advance if he has all that’s required timbres before downloading and installing a new third-party pack. The updated official Animoog Manual that came with version 2.2.4 provides the recipe to add presets which are not available from Animoog’s in-app store. It is however much easier if you use iFunBox, which allows you to create and move folders and move presets directly in new folders. You can use this tool to copy third-party Animoog presets on normal (non-jailbroken) iPads. Here’s step-by-step instructions to install third-party Animoog presets and timbres with iFunbox.

Here’s what I need to know from you if you created great Animoog presets yourself and would like to share them with the community of Animoog  players, please provide the following information:

You have other ideas? Let me know in the comments below!