One of my ongoing quests is to find an alternative controller for Animoog that would suit my playing style. This post focuses on the compatibility and capabilities of the Linnstrument and the ROLI Seaboard with Animoog now that Animoog supports MPE, aka Expressive MIDI.

Animoog 2.4.0 released about a month ago brought support for MPE input with note-per-channel MIDI controllers. This changes everything. Everything when it comes for Animoog to support sophisticated MIDI controllers.

What is MPE and why it matters so much? MPE is an extension of the MIDI standard that stands for the Multidimensional Polyphonic Expression specification. It is also known as ‘Expressive MIDI’. You’ll learn a lot more in this previous post a year ago about MIDI MPE’s development and its technical specification.

In short, this new way of leveraging MIDI messages makes it possible to control the multiple expressive parameters of a single Animoog note over the same old MIDI cables. The ‘core MIDI specification’ wasn’t built to handle multiple dimensions per note. Dimensions in Animoog? Think of modulations such as the different polypressures or orbit rates for every note played.

The advent of MIDI MPE significantly reduces the limitations external controllers had when it comes to controlling advanced sound synthesis instruments such as Animoog and Model 15. If I’m not mistaken, it also enables better means to record Animoog performances over MIDI (I haven’t made experimentations myself yet, but I plan to — and of course, I’ll publish my findings on this very site). Expect more and more controllers and apps to support MIDI MPE over time. And be happy, thanks to Moog developers, Animoog now supports it! :-)

The LinnStrument by Roger Linn Design is one of the alternative controllers for serious players. Yes, it’s different from the MIDI controllers we’re used to, but don’t be afraid by this grid of lights, just look at how others play with it and you’ll understand why it attracts that much interest. Every cell will reacts to z-axis pressure as well as x / y-axises for vibrato and modulation. Pitch slides are easily performed on the LinnStrument’s x-axis. The Sonic Lab video below will show this to you.

The LinnStrument also happens to be built and played by incredibly friendly people! I wanted to try the LinnStrument and Roger Linn himself nicely arranged a meeting with a LinnStrument owner in my home city of Montreal. That’s how I met with the wonderful Nathanaël last April. Nathanaël happens to work for the famous Moment Factory studio. He generously spent time with me on his LinnStrument, testing not only Animoog (which at the time didn’t support MIDI MPE) but also let me test how it feels to actually play  on the LinnStrument. Thanks a lot Nathanaël!

Sonic Lab just released a 22-minutes video review of the Linnstrument, and guess what, it extensively features Animoog! :-) This video not only gives you an idea of the capabilities of the LinnStrument,  Gaz Williams goes into the details of many of its features. This is a must-see video to anyone looking for an alternative controller for Animoog.

After trying the LinnStrument last April, there’s one question I asked the LinnStrument developers: can we select playable notes ourselves, just like we can select which Animoog keys show up on the iPad? The answer is essentially no. From their FAQ:

While I understand their valid arguments, I still think that it’s the single absent feature that stops me from purchasing a LinnStrument. The good news is that the LinnStrument firmware is open source, anyone can modify the LinnStrument’s software. Enthusiastic players could thus implement this features themselves. I thought of crowdfunding this feature with Bountysource for everyone to benefit from it. I went as far as creating this little explanation of what I was looking for. 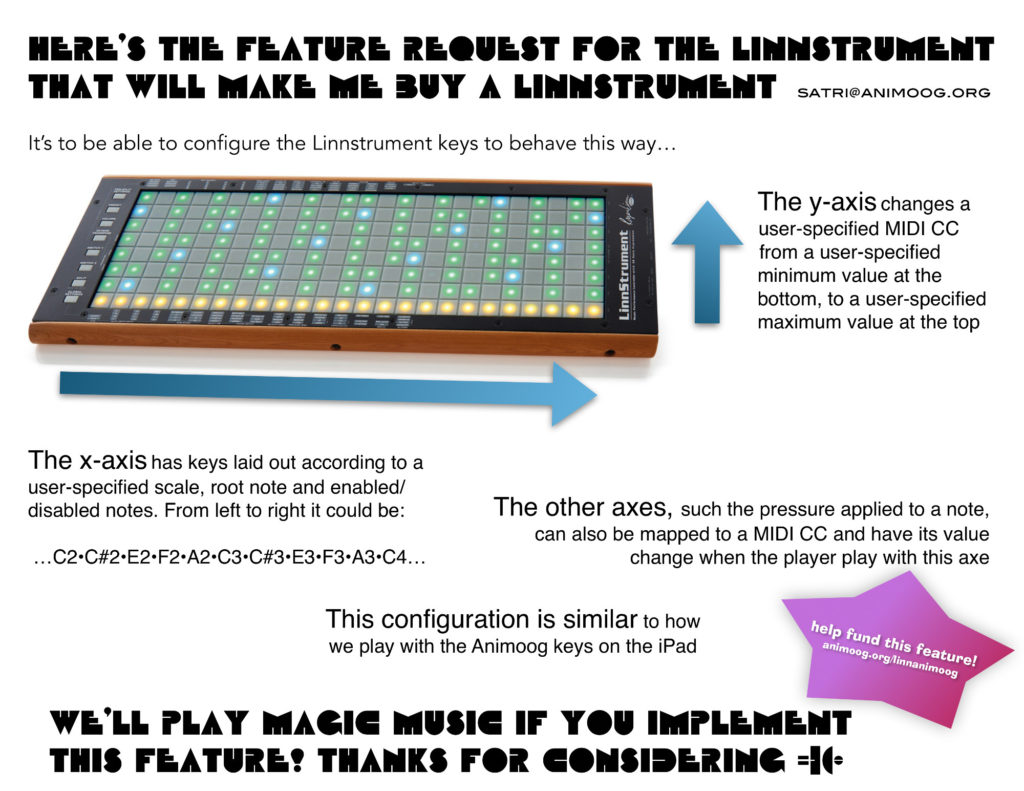 My recent discussions with the main LinnStrument firmware developer highlighted the following: “there are physical spacers between the rows of LinnStrument that prevent smooth transitions across cells in the vertical axis.” Despite this limitation, I still foresee this LinnStrument keys layout as valuable and being a useful way to play Animoog on it, similar to how we can configure Animoog’s keys on the iPad. At this point, the LinnStrument developers aren’t interested in even maintaining this feature if we successfully implemented it. I of course respect their decision and it made sense to me to postpone working on crowdfunding this feature.

But don’t stop yourself at my sentiment regarding this feature absent from the LinnStrument, the LinnStrument is clearly an excellent alternative controller and it usually pleases bass and guitar players because of its keys layout, Gaz Williams explains why in his extensive review. Here’s a nice LinnStrument track from Geert Bevin to give you a sense of how it can be played.

The LinnStrument is available for $1,499 from Roger Linn Design.

If you haven’t seen the ROLI Seaboard yet, I’m glad you’re reading this. One could dare think this keyboard came to existence to be Animoog’s companion. Let’s first have a quick look at what the Seaboard can do — notice the x & y gliding effects in the video, akin to the slides our fingers do on the Animoog keys on the iPad.

Anyone excited or considering a Seaboard should read the Sound on Sound Seaboard GRAND review which goes in depth and provides valuable details.

Ok, but how does this the ROLI Seaboard sounds with Animoog? We’re very lucky, Steffen Presley, the sound designer who created the Song Haven pack of presets for Animoog, recorded the following video showcasing Animoog on the ROLI Seaboard Grand.

The ROLI Seaboard has the scales physically locked to the piano scale, meaning my main reticence to adopt the LinnStrument is also valid for the Seaboard. Steffen Presley also warns us that playing micro-tonally, which was possible on the GRAND but never the RISE, is not an option anymore. Steffen provide the details in the description of the following video. Those interested in having access to this feature again should request it to ROLI directly.

Can I have a ROLI Seaboard? You can and you have multiple options. The smaller ROLI Seaboard version available is named the Seaboard RISE, the 25-keys is priced at $799 and the 49-keys is $1,199. The latter is currently out of stock. I haven’t found a comparison of the RISE and its bigger brother the Seaboard GRAND, but the GRAND features more inputs and outputs and has different keywaves. It also costs more, the 37-keywaves GRAND Studio is $1,999, the 61-keywaves GRAND Stage is $2,999 and the ultimate Limited First Edition version featuring 88 keywaves is $8,888.

For such an expense, you’ll probably want to try how a Seaboard feels like and sounds like before purchasing one. Here’s the worldwide map of ROLI Seaboard retailers. Trying one is the next step for me — despite the fixed scale, will I fall in love with it?

We’re just at the beginning of a new era of controllers and advances like the LinnStrument and the ROLI Seaboard are pretty exciting. Combined with Animoog, the most popular iPad synth, there’s certainly lots of wonderful explorations ahead! And expect even more surprises in the future, hey, synths are even making it to the augmented and virtual worlds. You got that right and this is nicely demonstrated by the Behringer DeepMind 12, which crosses the chasm and dives into augmented reality. The future is already here, it’s just unevenly distributed ;-)

Wrapping up this article, you might want to revisit this June 2015 article named Alternative Controllers for Animoog and the few posts on custom Animoog controllers. Now that we have MPE support in Animoog, the doors of the LinnStrument and the ROLI Seaboard are wide open to all Animoog players!

If you have comments or if some of the info I shared is wrong, let us know in the comments! Meanwhile, I hope you enjoy the numerous ways  we can be expressive with our beloved Animoog! — Alex / Satri